This 55,000 square foot project was completed in 2014. The building had been vacant for a number of years, and had developed numerous leaks. The scope of work included large areas of deck removal and replacement. A 60 mil TPO membrane was installed using a VADA Vent design. 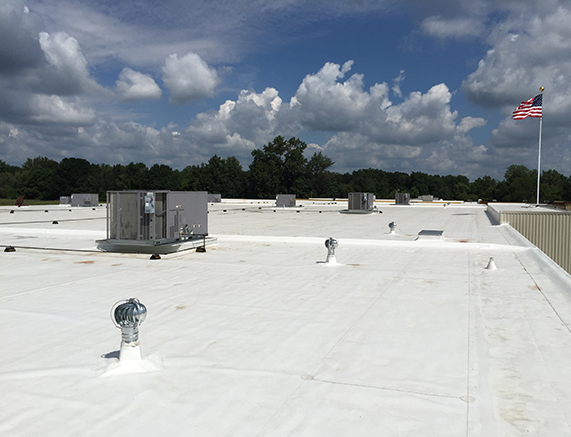 This 50,000 square foot area was previously covered by a failing standing seam metal roof. The metal flutes were filled with 2” insulation. Then, the entire area was covered with 1.5” isocyanurate insulation. The additional 3.5” insulation made a significant improvement to the comfort level of those working below. Then, 60 mil TPO was installed using a VADA Vent design. In these photos, the project is 5 years-old and has performed perfectly.

This 330,000 square foot project was reroofed in 2005. Insulation was secured using low-rise foam. Then, a VADA Vented Roof system was installed. 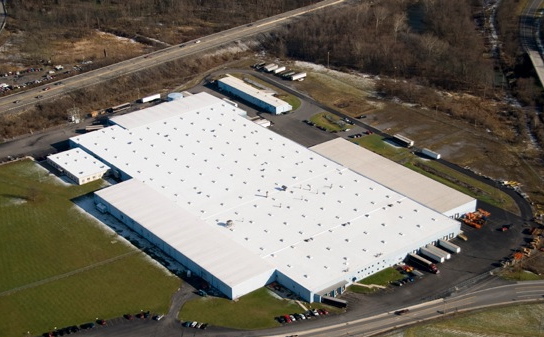 This 60,000 Square Foot VADA Vented Roof was installed in 2014. After installation, a bow echo line of thunderstorms produced 70 MPH winds. Damage in Quincy was so severe that a state of emergency was declared. However, the VADA Vented Roof performed perfectly. No damage, no leaks, no problems. Other roof areas of Quincy Mall were damaged by the wind. But, VADA performed. 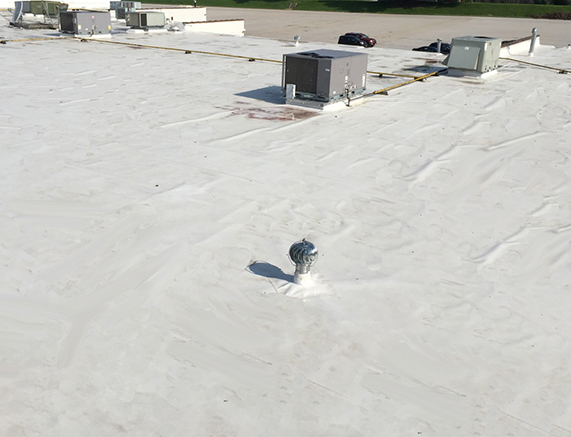 This 500,000 square foot roof is covered by a 60 mil TPO membrane using the VADA Vented Roof Design. This project was in place when the massive Moore tornadoes hit the area. No damage was reported. Beyond tornadoes, OKC has some of the highest, most sustained winds in the U.S. The tallest area (40’+), a 75,000 square foot area, has a VADA Vented Roof. The area is constantly hit with 50+ MPH winds. And, no damage has ever occurred to the roof. The roofer has been back to the project to repair damage that has occurred from high winds blowing metal pipes over or off. This damage proves that high winds have caused damage, but never to the roof. 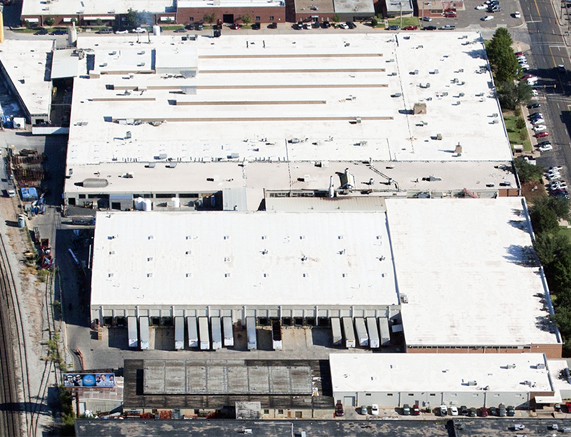 It is said that a picture is worth a thousand words.

Please look closely at the photo

A 120,000 square foot VADA Vented Roof in Hattiesburg, Mississippi was unharmed by winds from an F4 tornado that passed by in 2013. The tornado, which made national news, was so close to the VADA roof, that debris from a destroyed house landed on, and cut the VADA roof.

In spite of the damage to the roof, the F4 winds had no effect on the VADA Vented Roof. 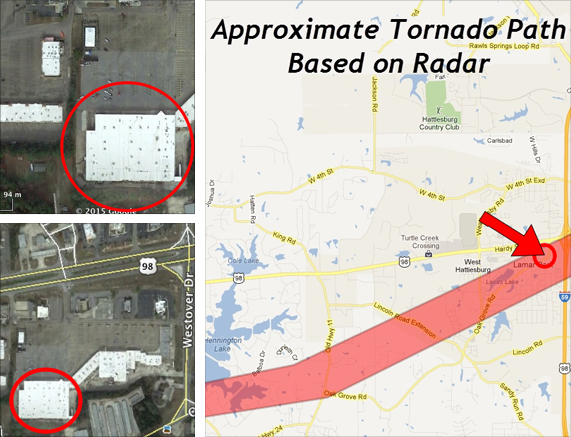 CAMDEN, Ark – “Families all over southern Arkansas are cleaning up after heavy winds brought down trees and ripped off roofs. Thousands of residents remained without electrical service Friday morning hours after a tornado-producing thunderstorm ground its way across Columbia County. Damage was extensive across South Arkansas and Camden was especially hard hit -- Cardinal Stadium was damaged and the roof was peeled back from sections of Camden Fairview High School.” - KTHV 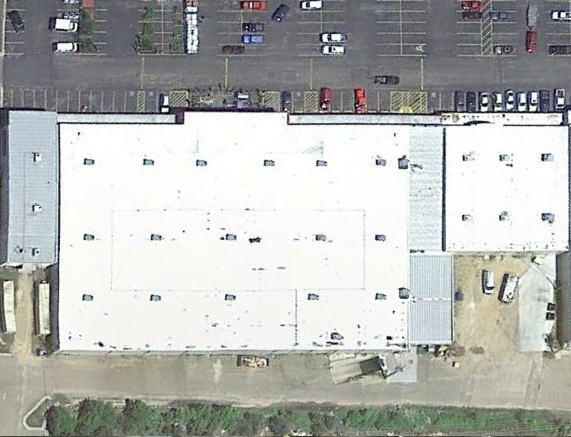 Why is this roof so ugly? Well, it’s 26 years-old in this photo. The building was vacant for years. While empty, it received little maintenance or care. Yet, the VADA Vented Roof system, which was warranted for 10 years, lasted 26 years. It was installed in 1987. It was replaced in 2013.

In 1998, 11 years after installation, and AFTER the warranty had expired, a tornado hit the town. A freight train was derailed 400 feet from the building. 68 of 80 rail cars were stacked on top of each other. Houses adjacent to the factory were flattened. On the building, other roof areas lost the roof and the roof deck. Standing in the building, one could look up and see sky.

Yet, the VADA Vented Roof didn’t move and didn’t leak. There were no repairs of any kind to make. All over Flora, Illinois, roofers were replacing their failed roofs. VADA performed.

This is the very first active vented roof ever installed as a commercial project, in the U.S. This roof started it all. And, did it perform? It lasted 2.6 times the warranty period.

The difference between this roof and today’s design is that this roof performed perfectly without VADA Vented Roof’s current augmented perimeter design. Today’s roofs have even more safeguards built into the system. You can install a VADA Vented Roof System with total confidence that it will perform. 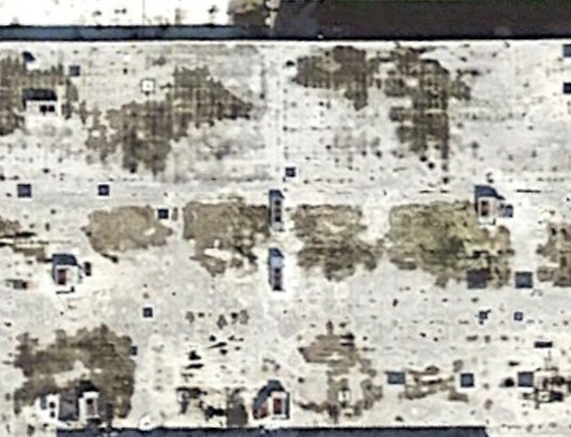 This VADA Vented roof was installed on a retail store in Colby, Kansas. Colby, Kansas may have the worst weather in the universe. (Exaggeration For Effect.) Seriously, since this roof was installed, 80+ MPH winds have hit Colby on a number of occasions. Baseball size hail hit the area. If any weather could test a VADA Vented Roof, Colby’s weather could. Wind and hail have damaged HVAC units and other building components. Yet, in the years since installation, the VADA system has performed perfectly.

This VADA Vented Roof protects sensitive pumping equipment for a municipality’s water treatment plant. The city previously purchased 450,000 square feet of VADA Vented Roofs. So, when they needed to protect this building, there was only one system: VADA. 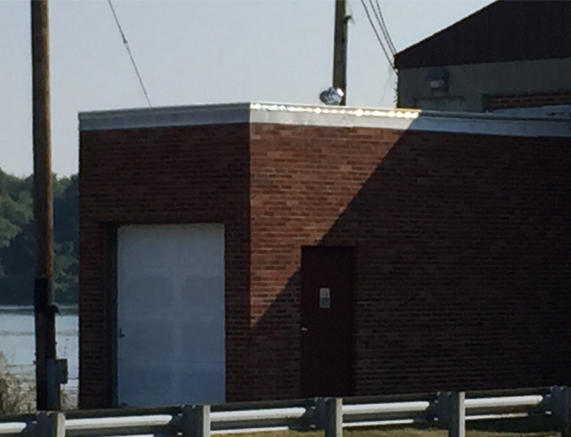 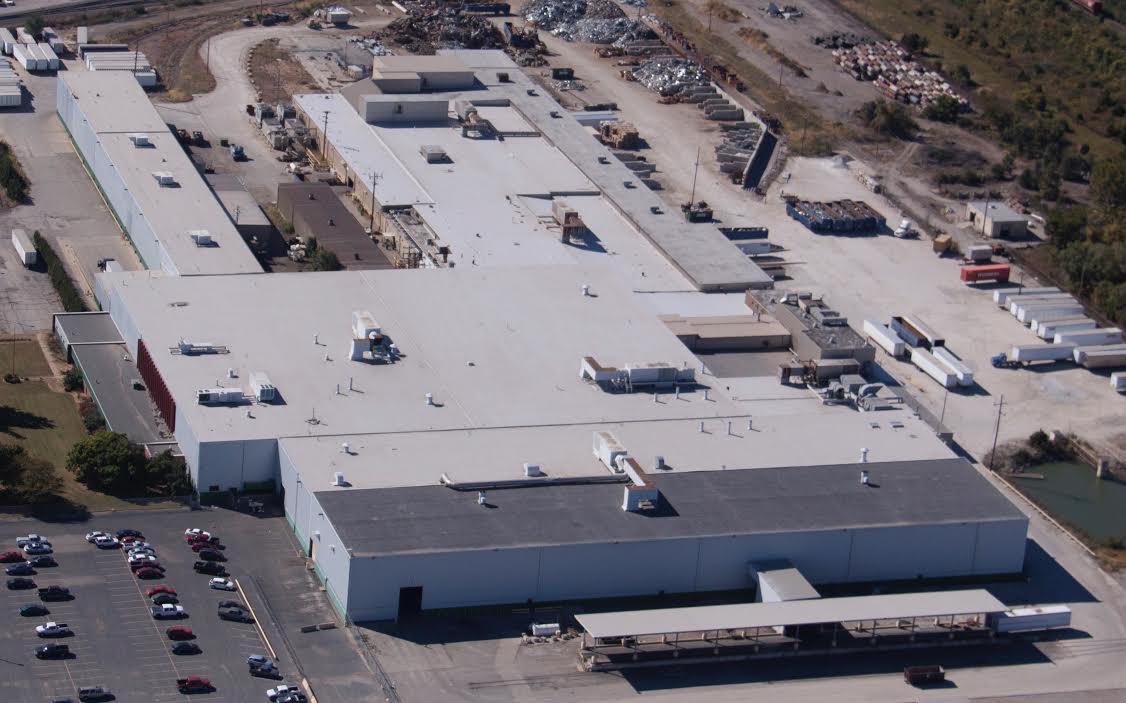 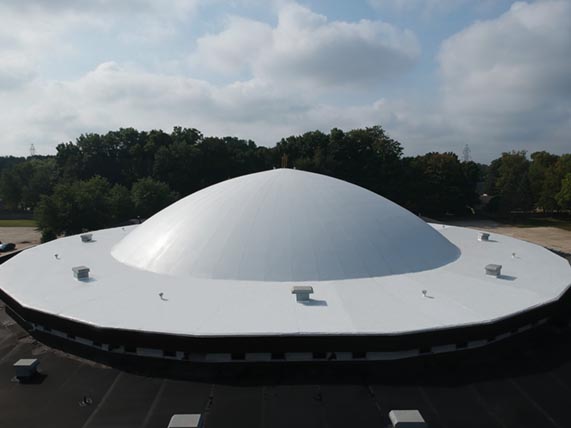 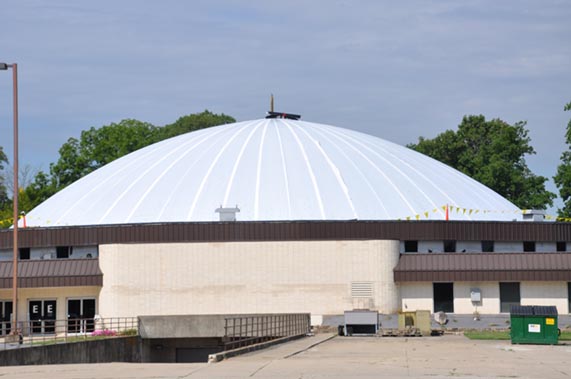 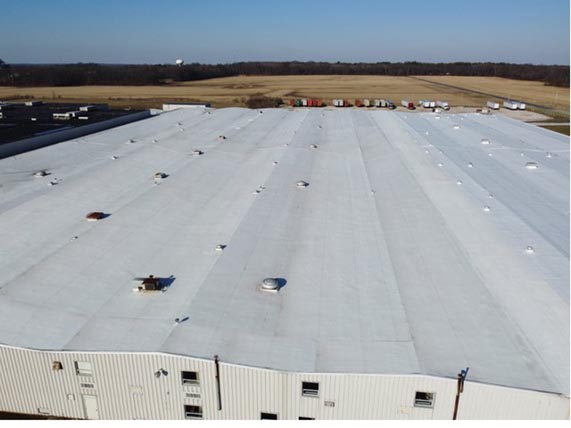 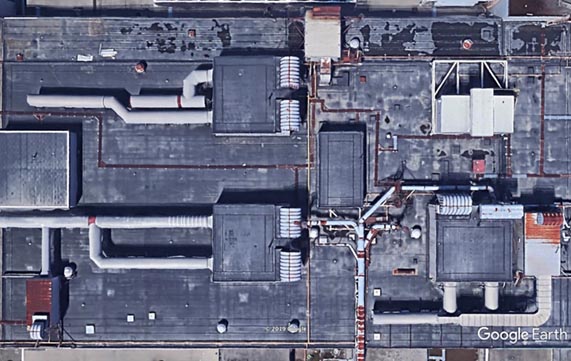 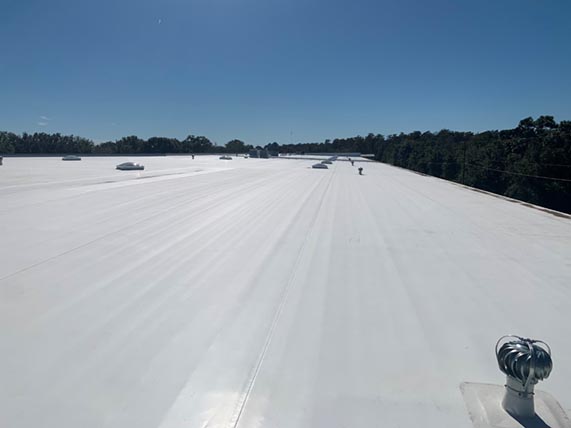 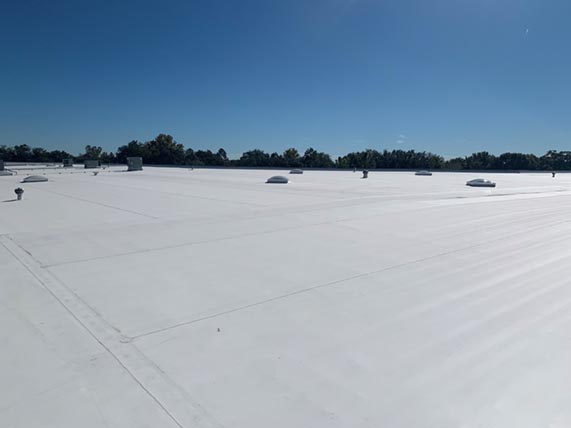 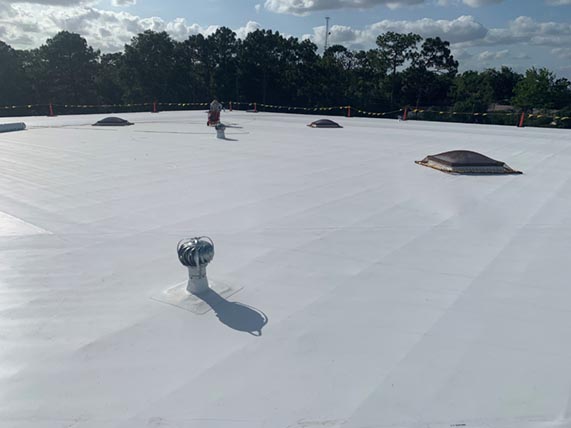 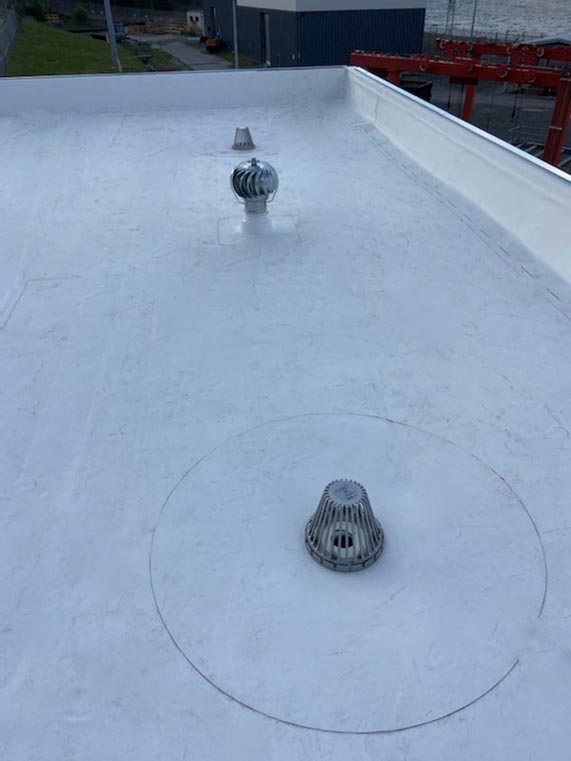 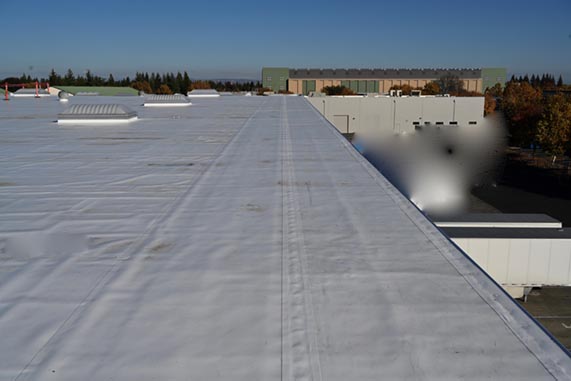 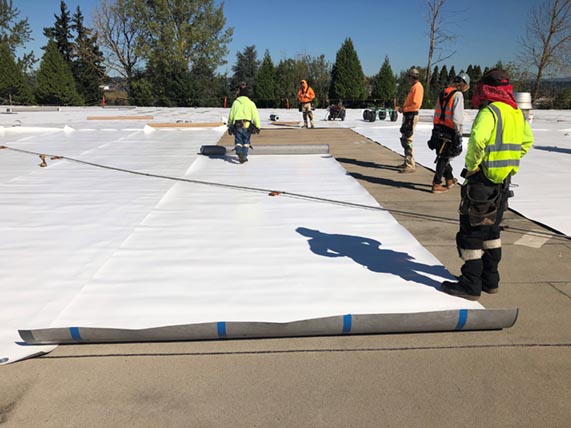 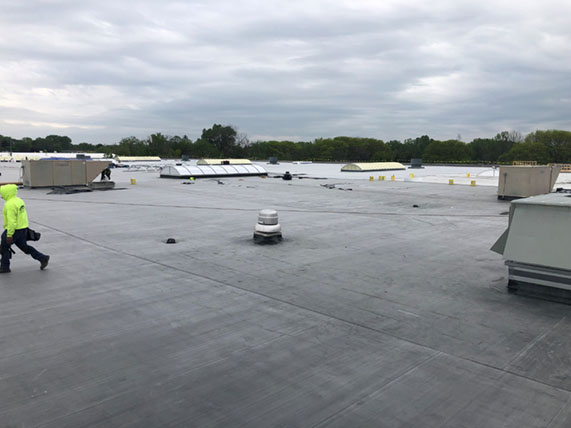 Get Connected with VADA 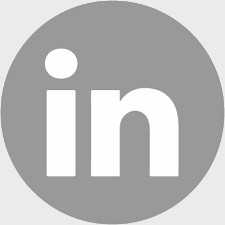